Boots on the Ground: Seeing Detroit as the “City of Opportunity”

Boots on the Ground: Seeing Detroit as the “City of Opportunity”

There has been a lot written about Detroit lately. Some of it has been overly negative, some of it overly positive. Projects such as Detroit Works seek to rethink the land use patterns of the entire city while organizations such as D-Hive strive to connect energetic young entrepreneurs determined to make a difference in the city. This is the second in a series of posts exposing you to our understanding of the city from the inside (the first post here). Through these posts we hope to bring to you a critical look at the history, current conditions, future potential, and legacy of the post-industrial city.

My recent and past experiences as both a practitioner and an educator have informed my view of the post-industrial city. I have been involved in three independent yet complimentary initiatives, all focused on specific aspects of Detroit: community, structure, and connectivity. Each of these elements will be outlined here and expanded upon in future posts.

This post argues that Detroit provides the most fertile ground for the development of the new city based on our experiences. 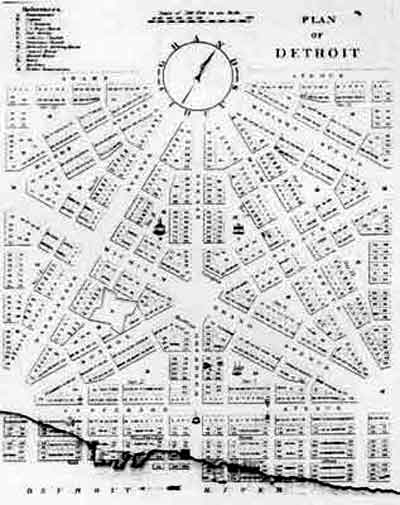 The many trials and tribulations of Detroit have been well documented:

Even though cities have seen over the past decade an increase in interest in reconstituting their cores, there still exists substantial areas of disinvestment. This brought about a condition of vast areas of vacancy and decay in many of the post-industrial metropolises, especially in the mid-west. Noted urban planner, Jonathan Barnett, in his book Redesigning Cities (Jonathan Barnett, Redesigning Cities, Planners Press 2003), identifies the fact that these areas should be opportunities for new real estate investment because many are located in excellent central city locations.

Barnett refers to Detroit as both a tragedy and an opportunity. He notes that thirty or forty years ago that large tracks of vacant land would be assembled into super blocks, but today cities have learned their lessons and leave the streets and blocks in place. He also cites the risk of Detroit becoming just another “edge city” within its metropolitan area because of the transfer of the historic advantage of cities being located near waterways to the new nucleus: the airport.Detroit is the same distance from its airport as are many of its suburban neighbors.

The intrigue of Detroit stems, of course, from the fact that it is “shrinking”. This shrinking is the attribute that provides the city with unparalleled opportunities for [re]development. The urban condition has become much more than the “hole in the donut”. It is a tattered tapestry. The element that sustains any tapestry, though, is the quality of the connections.

John Fraser Hart in his book, The Land that Feeds Us (Hart, The Land That Feeds Us, Norton and Company 1991), outlines the deconstruction of the farming industry through consolidation and dissemination of land resources. Hart reasons that a return to immediate access to fresh goods provides a niche for urban areas. This thinking informs the decisions that created the “Villages” community in Detroit. If the community could produce its on food it could create its own self sustaining economy.

I was a team leader for the Villages Charrette, a planning initiative for Detroit’s Eastside which took place over a three day period in March of 2009 and involved the faculty and students of the three universities in the Detroit area: the University of Detroit Mercy, the University of Michigan, and Lawrence Technological University. 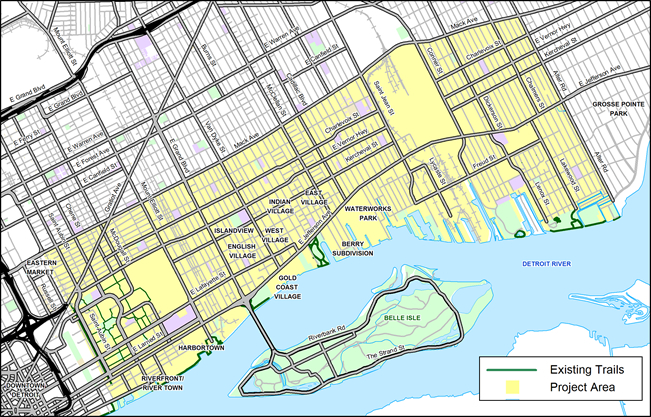 Location of the “Villages” in Detroit- courtesy of the Villages
The Villages was conceived as a “whole life” community. The existing housing stock, consisting of single family, townhouses, mid rise apartments provides for the availability of many levels of affordability. The most instructive element of the proposal is the ability to rethink community without leaning on the crutch of infill housing. The emphasis becomes “commerce” as opposed to housing or retail.

Hart explains that it is not just the availability of land that makes this an attractive alternative for the new city, it is the location. Historically, older urban areas have developed with concentric rings and the intensely cultivated farmland has been pushed outward as the city has expanded. The inner rings have the opportunity for nurseries and greenhouses and the outer rings have opportunities for truck farms and dairy farms. These  types of proposals are controversial but they deserve a critical analysis as PART of a rethinking of how some cities are organized.

Some architects and planners think so. In some respects that was the charge of the American Institute of Architects’ Sustainable Design Assessment Team. The team came to Detroit in hopes of fashioning a framework for that could help in dealing with the massive change that is going on in the nation’s tenth largest city.

My role in the SDAT process was to provide first hand knowledge of the city to the national team as well as to lead teams of planners to generate ideas and analysis for the study area. 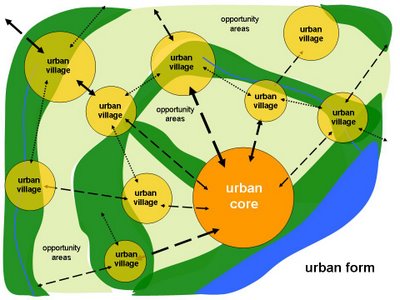 SDAT village diagram- courtesy AIA SDAT
The most important idea to come out of the process was the rethinking of the fundamental structure of the city as illustrated in the image above. At the core of the SDAT process are the three elements of Sustainability: Environmental Stewardship, Social Equity, and Economic Growth. All planning decisions are made based on all three tenets.

An Equation for Thriving Cities:

Understanding and defining the land use sets the framework for dealing with equity through access  to commerce. What were the Industries that could be tapped? The SDAT team identified Food and agriculture and Renewable Energy resources as two areas that Detroit could immediately tap into. Is it too late now for these initiatives?

Currently, we are involved with projects that are rethinking the major arteries that serve as the urban planning and infrastructural backbone for the city. We have studied and planned many of Detroit’s corridors: Gratiot Avenue, 8 Mile Road, Vandyke Avenue. Our latest arterial of focus for work and investigation is Woodward Avenue, Detroit’s Main Street. We are part of two multi-disciplinary teams that are looking at transit alternatives for Woodward as well as development of a Complete Streets plan for the corridor. 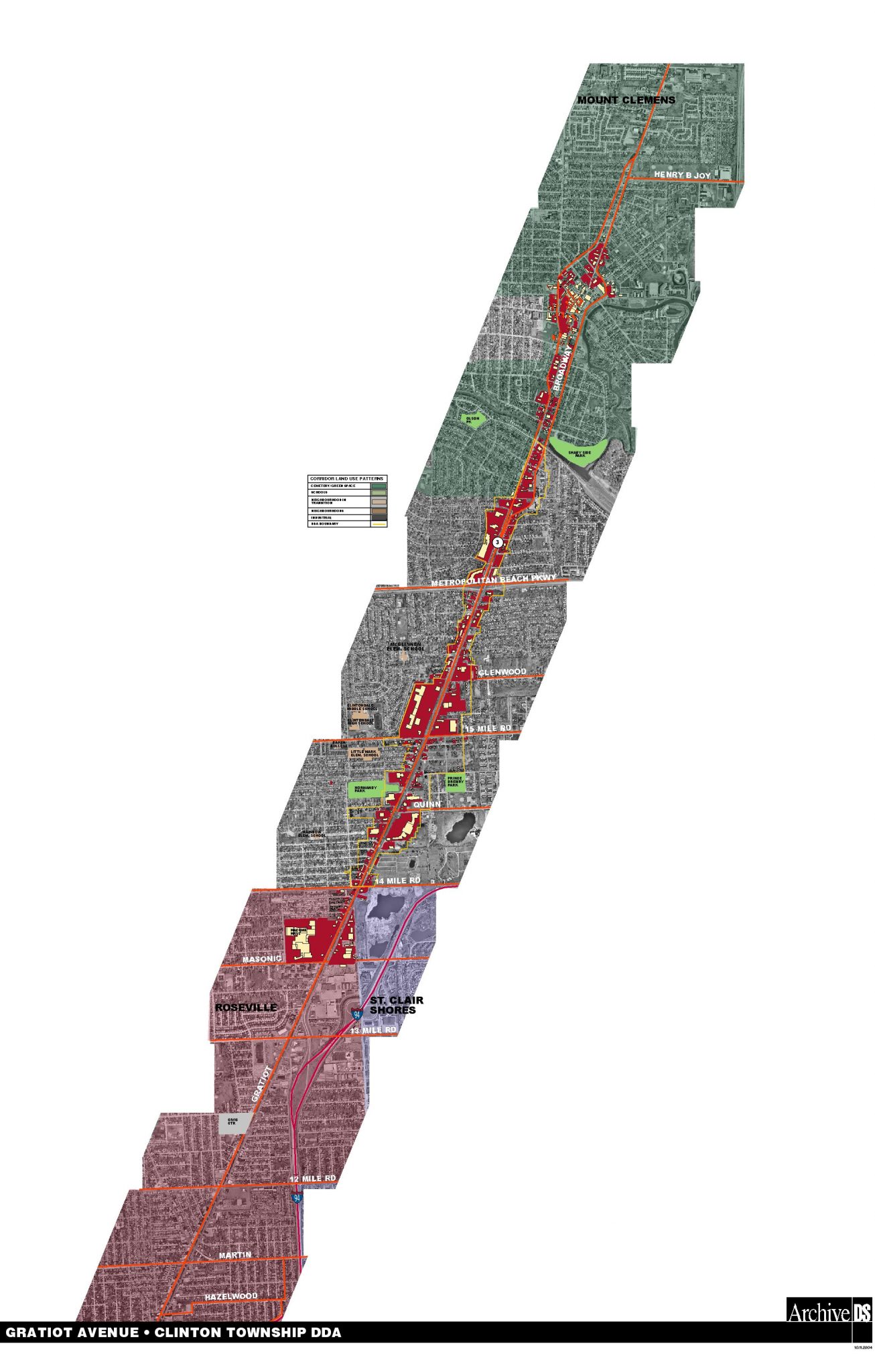 Gratiot corridor masterplan, Detroit- courtesy Archive DS
As we have outlined in previous posts, we believe that corridors, specifically, and streets, in general, are the forefront for urban planning and public space design for the 21st century.

In order to truly achieve new, better cities we must strive to use opportunities that are inherent in a place to enhance our communities. Historically, society has used technology to overcome the environment. The city of the future will use technology to preserve the environment or enhance it. Technologies for harnessing neglected resources (e.g.: wind, water, etc.,..) and universal access to information are near term realities.

“The City of Opportunity”: The condition where the city develops based on an acceptance of its reality as opposed to its desires.

New proposals for mega-projects in our urban cores bring hope for the present but at the same time threaten the future by creating a “one size fits all” approach to city rebuilding. Without proper attention to the attributes that make each city unique and the connective tissue that bind these attributes, the cities of the post-industrial midwest will not survive.