There has been extensive dialogue about the way that the built environment has been created since the end of the Second World War in 1945. That was a seminal point in global history, where cities of the world started to build and rebuild themselves after severe disruption and destruction resulting in a fifteen-year chasm and a jolting double hit of the Great Depression followed by World War II. There was a clear change in emphasis from 1929 to 1946, where the focus of building cities, towns and villages moved away from being structured around people and the way environments had been built for centuries. A new emphasis was toward the development of a different world where accommodating technological advancements, and mass production was to be the driver of decision making. Fundamentally, this move eventually leads to deemphasizing the needs of the user (people) within the built environment toward tools (Automobiles). 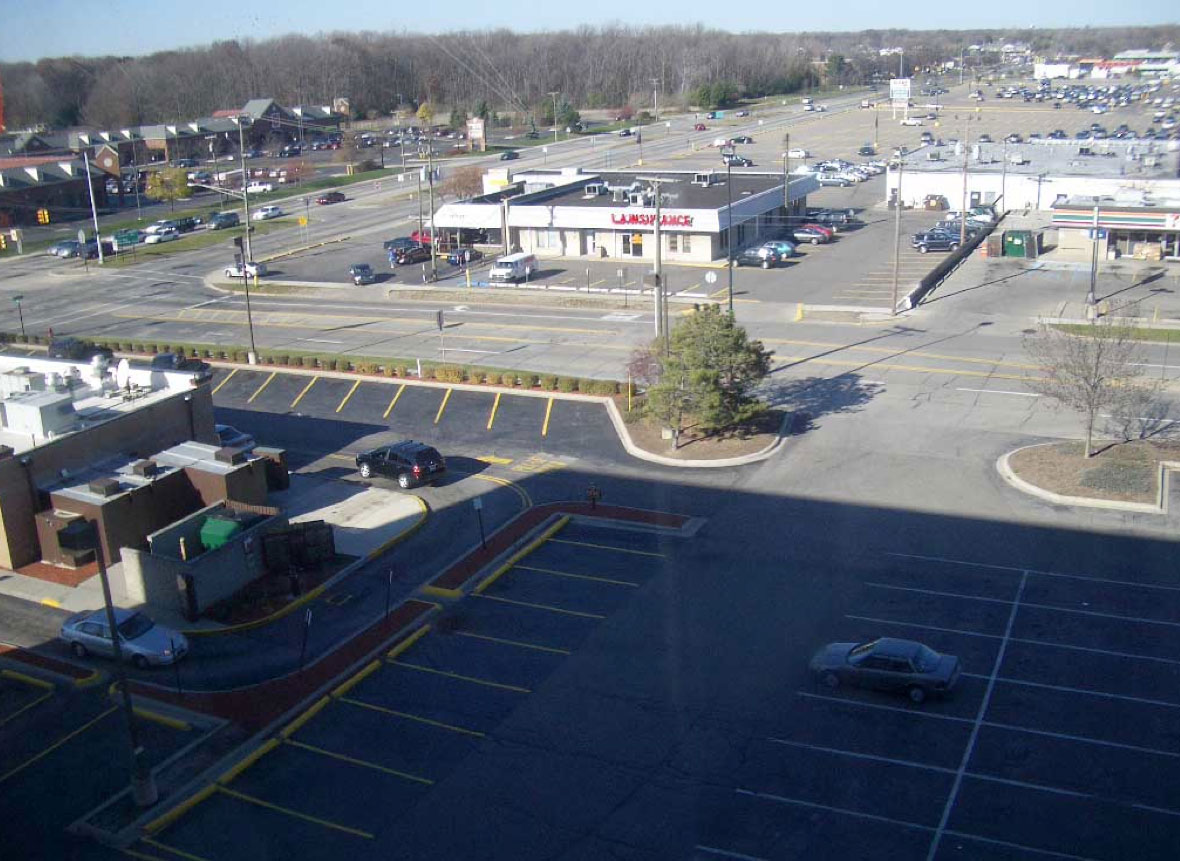 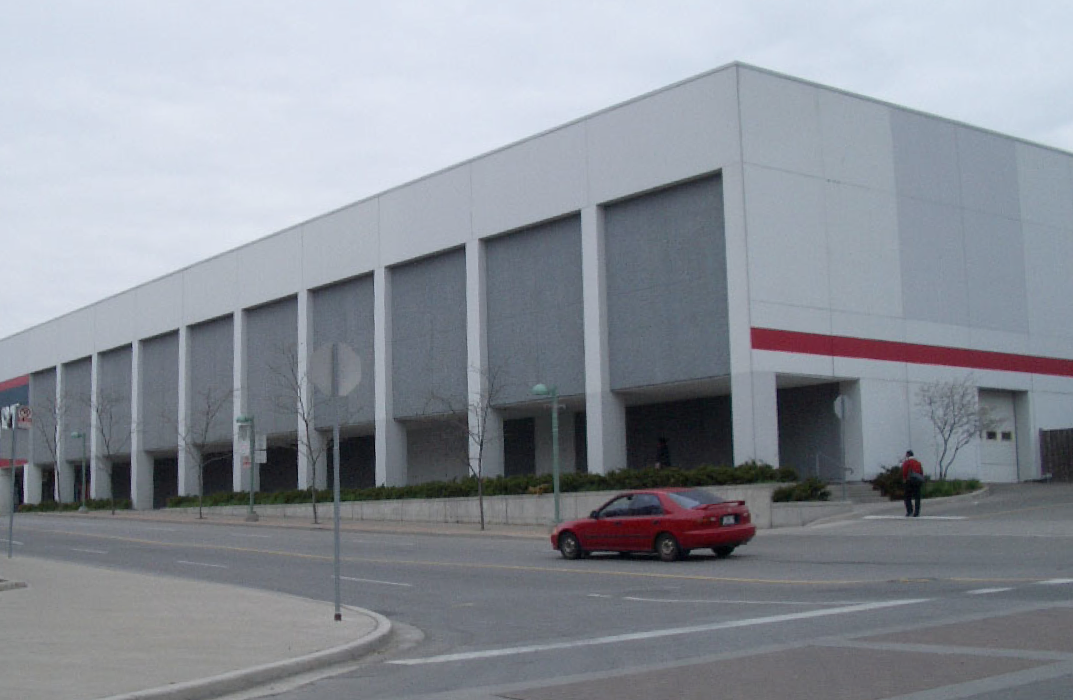 Blank walls of a retail building – Pedestrian scale is not considered
Specifically, human scale and the characteristics of a person became secondary in many aspects of urban development, notably in the design of streets, public spaces and buildings. The results can be witnessed in every community where there are no sidewalks, where blank walls of a building rise adjacent to where a person would enter or where vast asphalt expanses sit in front of places of recreation (shopping centers/theaters/sports facilities), work (office buildings) and living (apartment buildings). Building places and structures for the particular needs of human beings has been a lesser priority in many parts of North America and beyond for nearly seventy years. 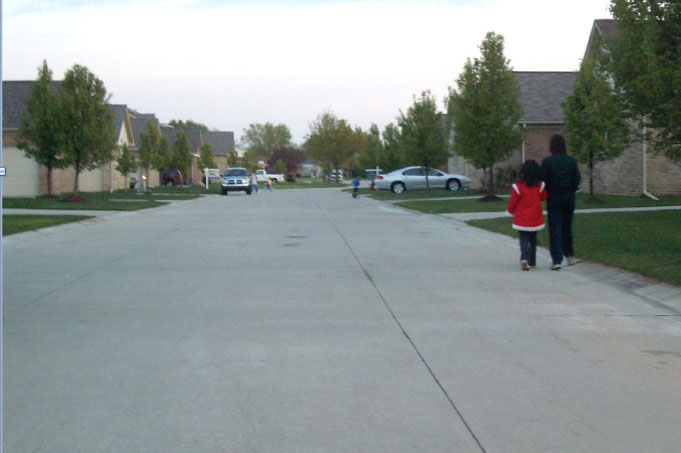 No sidewalks for this residential development

Over the last decade or two, the dearth of people-oriented development has started to diminish. As the interest in occupying traditional cities, villages and towns has increased, so has the reconnection to the value and importance of building our communities for people as the first priority. One important component of this is the recognition of the human scale. Building places for people requires that the designer of a space focus on the scale of a person and how people use and perceive space. Human beings, for the most part, experience interior and exterior space in a similar manner. The average woman is around 5’4” tall and the average man is 5’9”which equates to a typical human view cone of vision originating at roughly 5’ above the ground or floor plane. 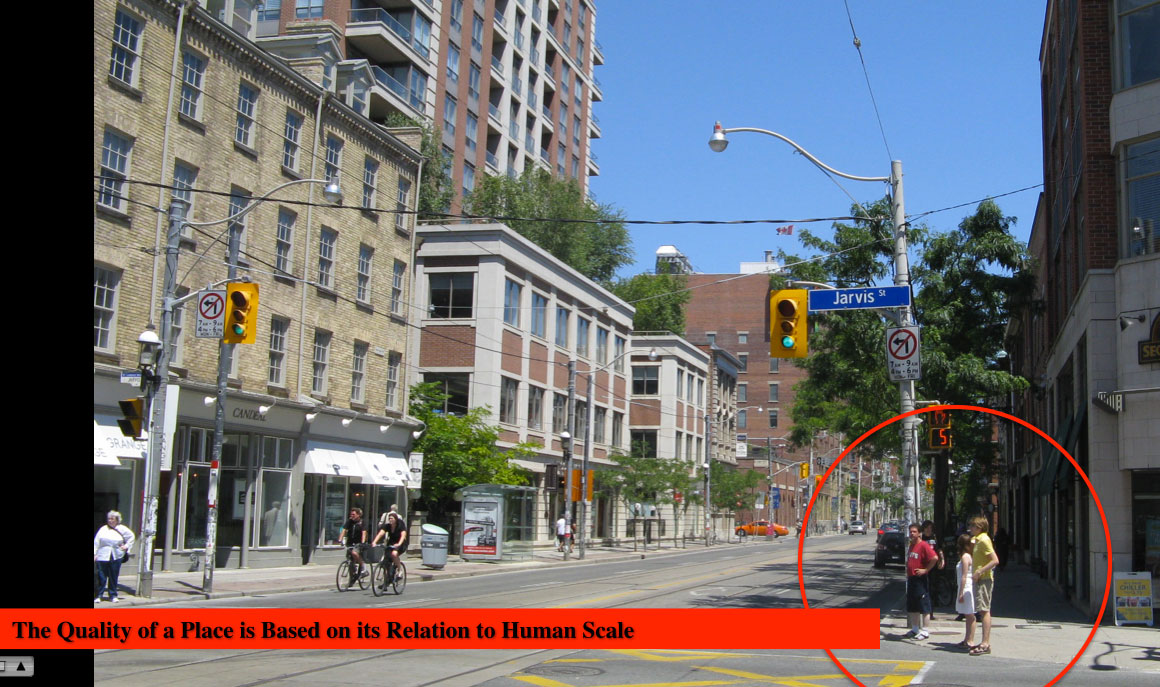 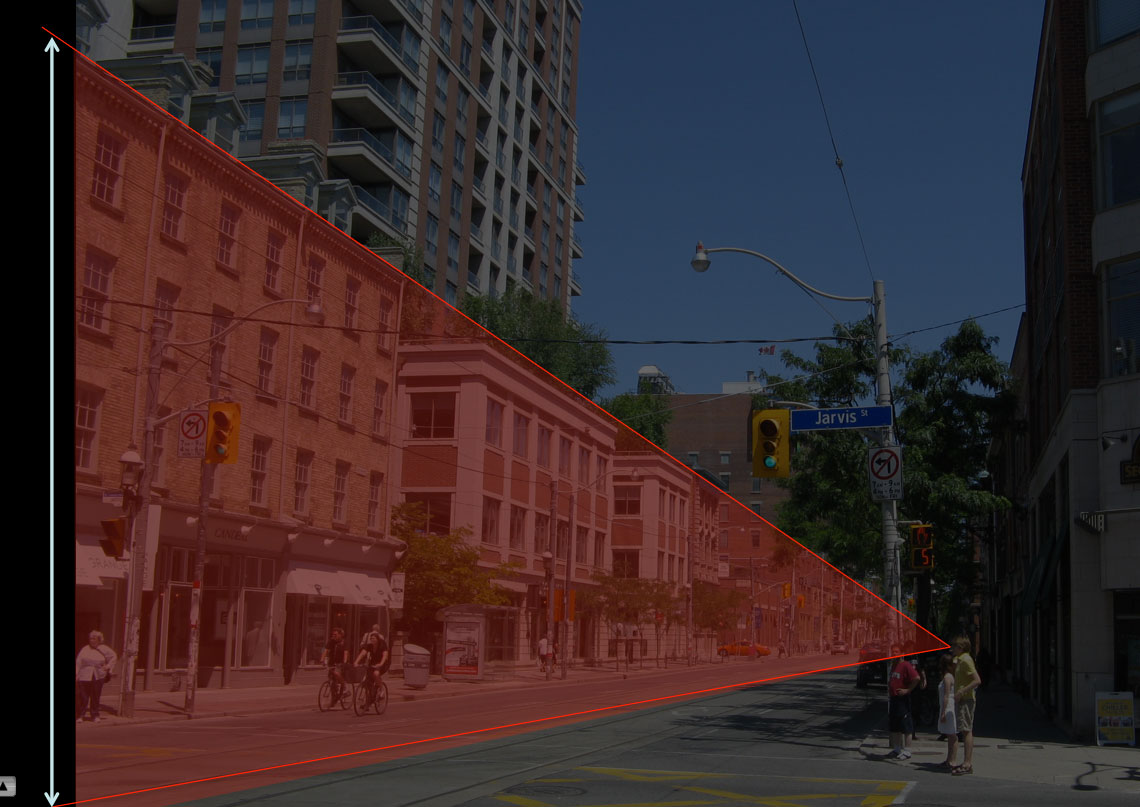 The feeling, whether comfortable or uncomfortable, that an individual gets from occupying and perceiving a space is based on this dimension. In an urban environment, this can best be defined by the width and the height of buildings along the street and the “urban room” that is created by the enclosure of buildings within a space. In the seminal text “Great Streets” by Allan B. Jacobs, numerous examples of successful urban condition are beautifully illustrated to assist in the understanding of how the connection to the human scale is addressed. The development of buildings, structures, infrastructure and the overall built environment should accommodate this humanistic point of reference in order to establish appropriate places for people. 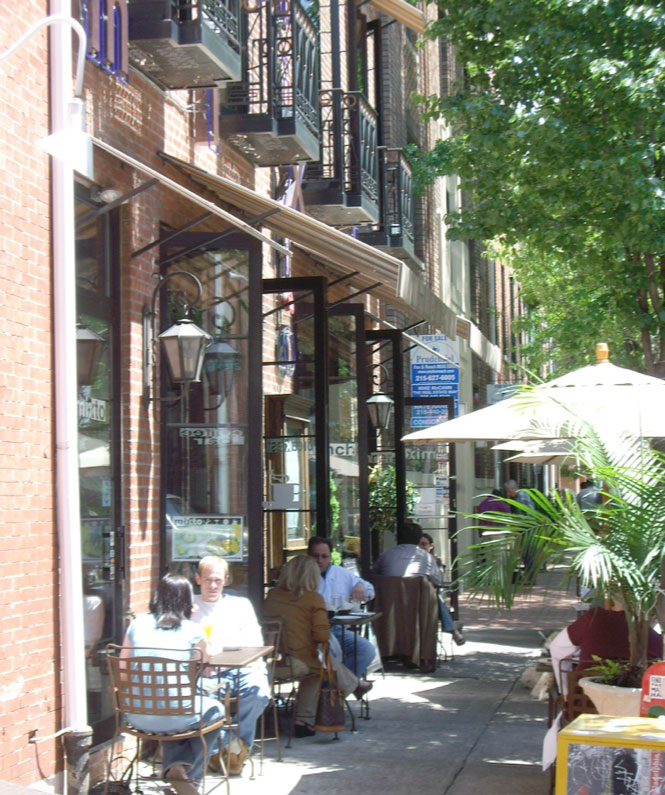 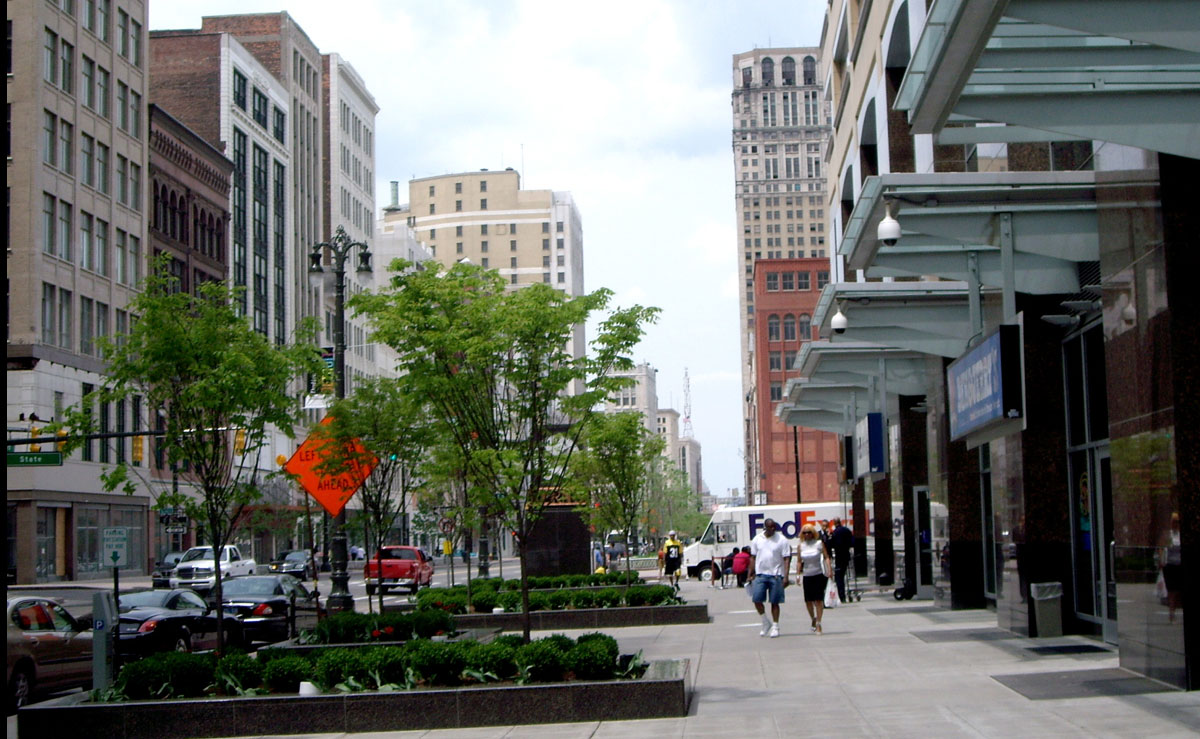 Downtowns, neighborhoods, districts, streets, civic spaces and buildings are the places and elements of the built environment that make up the daily existence of most people lives. The way that a person perceives each of these places is based on our unified view of space and their design should be directly attentive to this human perspective in order to establish successful environments that people want to be within. It becomes quite evident when the design of an environment has not been sensitive to these scale and perception issues. When we use the terms, “places for people” or “placemaking”, the focus on human scale is what is primarily important. When this is done well, a place becomes comfortable to occupy and will be of value to people and municipalities. These are the environments with lasting value and that are worth caring about for decades and centuries. 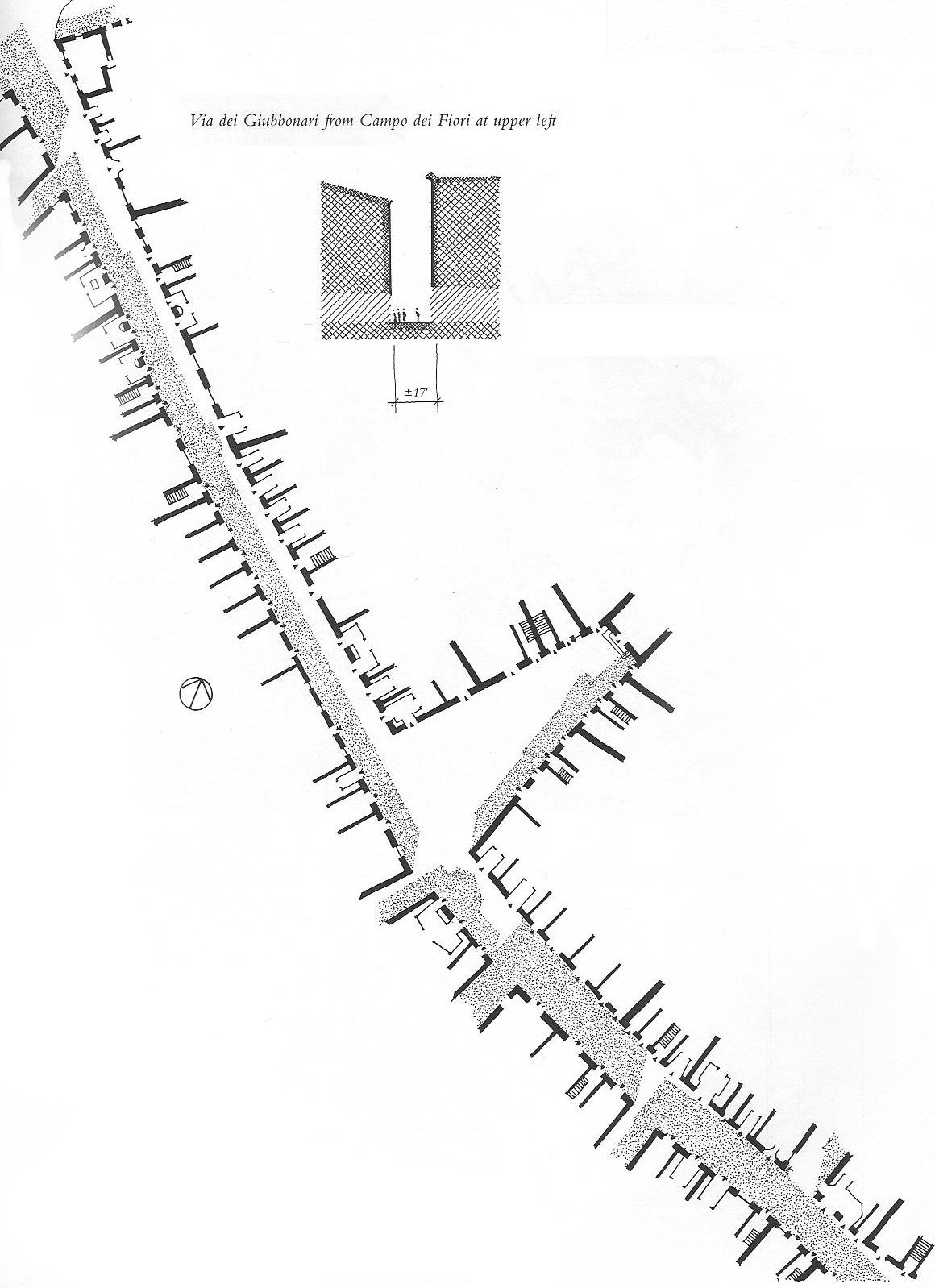 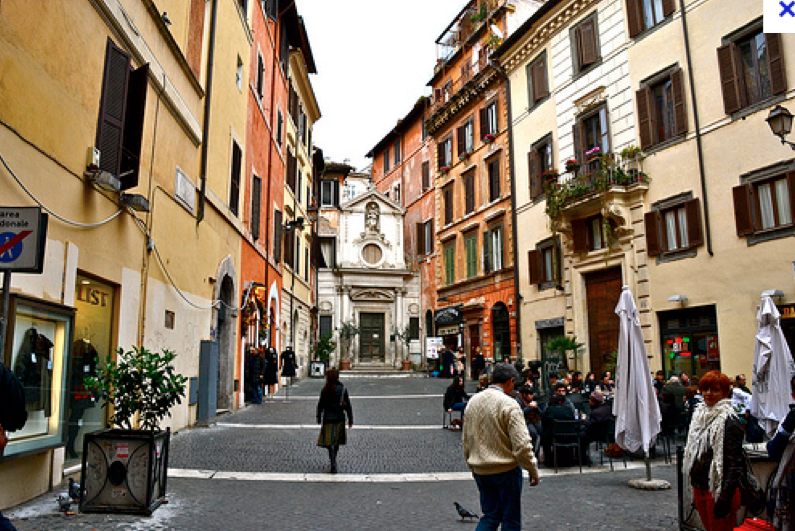